Here is a table of some Progressive Voter Recommendations. You can also click on links below the table to read about their reasoning.

Brett Kavanaugh is unfit to be a Supreme Court nominee regardless of what he may or may not have done as a teen. 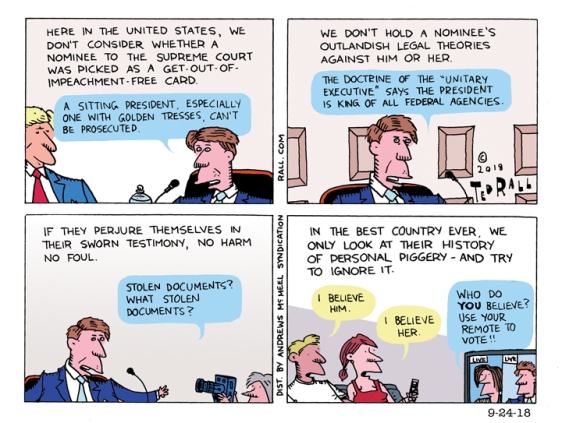 First of all, his record is more of one of a political hack—someone who has spent much of his career involved in party politics on behalf of the Republican party, meaning he is not likely to be unbiased in political type cases—e.g. gerrymandering and voter registration—that are likely to come before the court.

Then has been Kavanaugh’s demeanor in the hearings. The hearings are a form of a job interview, and his attack on his employers—the people who vote to appoint him or not, show he does not have the demeanor to be a judge. A judge of the highest court in the nation needs to be able to not take a job interview personally and let his emotions control his actions. His actions in the hearings do not show that.

It is also hard to believe Kavanaugh’s testimony about what kind of person he was at that age, given what is known about him from others and the culture of the school’s he went to. His attack any for questioning him on such an unlikely story, again shows is lack of character.

He accused the Democratic party and Senators of creating a conspiracy against him. If someone goes into the court believing one party is conspiring against him, and states so publicly, he cannot then be seen as impartial.

And even if here was an attempt by one party to disqualify him, does he feel the same way regarding how the Republican party openly conspired against Obama’s nominee? The Republican’s did not even allow a hearing, and then changed the rules once they had power to allow a simple majority to select the Supreme Court judge when up until then it took 60 votes. I call that a conspiracy. A democracy is not the rule of the majority over the minority, but a working together of the whole for the good of all. The Republican’s did not even try to hide their partisan purpose behind those actions.

Any single one of these, and more, are reasons alone to disqualify Kavanaugh to serve on the Supreme Court. Put together they make a travesty of our legal system and our Democracy.