The No Child Left Behind Act (NCLB) was promoted as the savior to a failing public school system. However I am going to make the argument here that those who wrote the actual legislation must have had in mind the dismantling of public education, and to move our country’s educational system into the private sphere. NCLB can be seen as one facet of a movement to privatize as much of our society as possible. It is consistent with a view of people as consumers rather than as citizens. Democracy becomes equated with individual choice of what to “purchase,” be it products, services or elected officials (in contrast to the idea of democracy as people working as a community making decision together). Those of this view see public entities as interfering with the advantages of a competitive system based on monetary profit/loss. 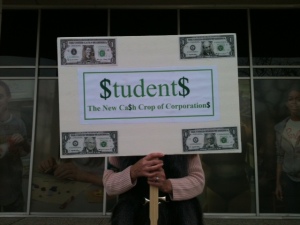 There are very few public spheres left in our country. Two notable exceptions are libraries (which are rare and often inaccessible in poorer communities) and our schools—places where people of all walks of life have theoretical equal access and a place to interact as equals. While public schools have always been an arena of political controversy and under criticism for not meeting their promise, it is within the last 25 years that a full blown attack has been taking place through the mass media to discredit them completely. The 1983 report “A Nation at Risk” can probably be considered the turning point in moving general public opinion to view our public schools in a negative light. While I will not go into the history here, NCLB can in many ways be traced back to a series of Federal policies that followed from the “Nation at Risk” report.

One way in which NCLB is being used to discredit public schools is through the use of the term “failing school” for schools whose students do not reach the target test scores as mandated by NCLB. The federal government has set arbitrary goals as to what percentage of students must score at the “proficient” level on standardized tests (and what is called proficient is to some degree arbitrarily set by state legislatures, and varies from state to state). Not only must a certain percentage reach that score but that percentage within each subgroup of the school must reach that goal. If even one subgroup fails to reach the goal, the whole school is deemed to be a “failing school.” How much progress the school has made toward reaching the goal is not counted. A school that the previous year was way below the target and made it almost to the cut-off is a failure, while another school that was just a fraction below and moved up to a fraction above is not. A school can even move down and not be considered a failure, as long as a sufficient percentage of students score above the cut-off.

Furthermore, it is a moving target. What is considered successful one year is a failure the next. Each year the percentage of students needing to meet the “proficient” level is raised until by the year 2014 every student in every category must score at the proficient level – be they second language learners, learning disabled, or for whatever reason unable to score well (they had a stomach ache?). This is, of course, an unattainable goal, at which point basically every school in the nation would be considered a “failure.” Since the greatest predictor of test scores is parental income and educational level, most schools that serve poor and minority students are already being labeled as failures, and being forced to give up local control of their curriculum. In the meantime, schools that serve higher income students can generally meet the test score goals and avoid the sanctions (at least for now).

As schools take drastic measures to boost test scores, they often turn the curriculum into full-time test preparation activities. Many parents may notice that their children enjoy school less, and find that this is not an atmosphere in which they want their children to spend 6 hours a day for 180 days a year. Those with the financial or other means often move their children into private schools or choose to home school their children. This again moves more children out of the public school system, which further reduces the number of people with a direct interest in maintaining them, especially among those who are likely to have political power. These also tend to be the students most likely to do well on these tests, making it even more likely that the school will “fail” the test.

As more and more schools get labeled “failure” under this law, those opposed to public education will say, “See, we tried everything we could, and this proves that the public school really are a failed experiment.”

A second way in which NCLB is an attempt to privatize pubic education is through the measures that schools must succumb to when they are labeled “failures.” At first they must hire consultants. These consultants generally come from the for-profit private sector, and are often connected to text book publishers. A school that continues to fail may be turned into a charter school, often run by for-profit companies, in those states that allow charter schools. Failing schools can be required to offer private tutoring to students who do not reach “proficient” scores on the tests (reducing funds available for improving or even maintaining the resources at the school). Also, these schools can be pressured or forced to use programs from a select list of publishers that are endorsed by the federal government, possibly giving up locally produced and developed programs. In this way, while the school may be public in name, many or most functions, and control over the curriculum, may have been given over to for-profit companies.

In this way the law actually has the effect of taking funds away from the schools that need it most, as schools that are labeled “failing” must spend their money on these outside consultants and to pay for private after school tutoring for the students who fail the tests, further reducing the already scarce resources to provide a decent education for the population as a whole. This does not even include the enormous funds that are required to conduct, purchase and score the tests and the test preparation materials.

What is wrong with privatizing education? The question is do we want the educational decisions—the decisions about what we think it is important for our children to learn, and in what environment they will do that learning—being made by private corporations for private gain, or conversely by public entities, in which the public has a say, for the public good?